Central figure of the revival of a cultural movement that has been deeply rooted in the Salento region of Italy (Apulia) for centuries, Antonio Castrignanò single-handedly embodies the enthusiasm, energy and power of a new musical tradition which has the entire Southern Italian region buzzing with excitement. Produced by the electro-oriental music master Mercan Dede, Castrignanò’s new project, Fomenta – Ilenu de Taranta, unifies the old and the new, reaching far beyond the Salento borders and attracting musicians from all over the world.

Singer and tamburello player, Antonio Castrignanò is a fervent defender of the traditional music of Apulia: the Pizzica dance, also known as the tarantella of the Salento region. Linked to ancient pagan rites of possession, these dances and rhythms have always been part of the Southern Italian tradition, even when the church banned them. This particular rite originates from the bites of tarantulas in the fields: the effects of the tarantulas’ poison would disappear only if the victim kept dancing for hours, entering into a trance.
Antonio Castrignanò joined the rediscovery of this phenomenon of Salento folk music as a young teenager, alongside only a handful of other musicians. With attention to the styles of the past as well as the curiosity of those who want to experience contemporary challenges, Antonio explores the expressive tension that exists between these two directives to build a modern sound based on this ancient tradition, often characterized by his own compositions.

Fomenta – Ilenu de Taranta, Castrignanò’s new recording project, is yet another turning point in his already eclectic artistic career. Together with Turkish DJ and producer Mercan Dede, the traditional Pizzica is regenerated and inspired by the sounds of today, creating an atmosphere comparable to that of electronic raves.
15 years ago, after a massive immigration wave that depopulated the region during the 50s, and facing the retracing of Europe’s borders, the nine villages of the Greek Salento region – a vestige of Byzantine domination and Ancient Greece – wished to reaffirm their identity. “This is where our traditional music gets back to its fundamental roots, providing us with a solution when facing the anxieties of globalization and the modern world”. This linguistic idiosyncrasy isn’t a barrier between Antonio and our society. On the contrary, In his music, traditional instruments coexist with technological innovations, while he seamlessly bridges the gap between the old and the new.
Singing in the Lecce’s dialect and also in Griko Salentino, Antonio Castrignanò keeps this traditional music alive, all, while lending it a new and modern environment in which to thrive, and Mercan Dede’s electronic mastery blends in perfectly with the album’s traditional roots. 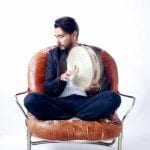 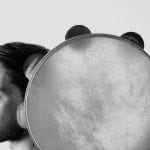 «The frenetic Italian Pizzica is reinvented by this charismatic singer from Puglia, who reconciles the roots sound of this popular rhythm with the electronic sounds of Turkish producer Mercan Dede. The result is mindblowing. »  Télérama Sortir

«The young Antonio brings a Rock ‘n’ Roll energy and a Celtic vibe, the combination of which is reminiscent of The Pogues. » Libération

« [Castrignanó] revives melodies from the [Salento] heritage with an infusion of Rock. » Le Monde

«The Salento tradition modernized by Castrignanó, (…) will make you lose your mind and then find it again. » L’Alsace

«Antonio Castrignanó is one of the key figures in the revitalization of the Pizzica tradition, (…) this music, known for its hypnotic rhythms, is treated with a healthy makeover throughout the course of the album. » QUE TAL PARIS